Non-winter seasons at this latitude are crammed into a much shorter length of time than in the Lower-48.  Spring comes late and flowers rush to complete the bloom/seed cycle.  Early wildflowers are reaching their peak in Southcentral Alaska, like these Jacob’s Ladder blossoms at Eklutna Flats. 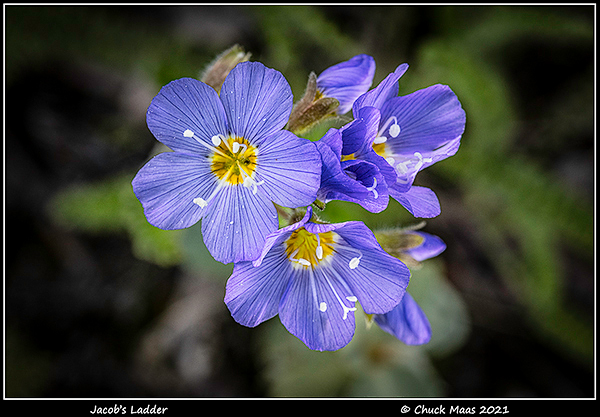 Posted in Flora | Tagged seasons, wildflowers | Comments Off on Springtime 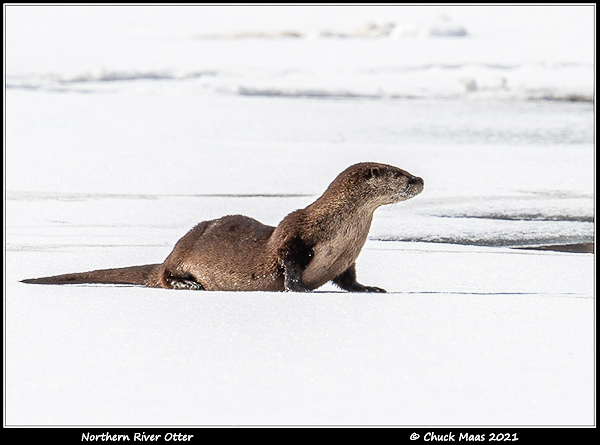 It’s that time of year again, when winter begins to fade as temperatures gradually rise above the freezing point.  One of the first spots in Anchorage where the change is most notable is a shallow manmade lagoon along Chester Creek.  Parts of the creek flow fast enough to maintain a little open water through most of the winter, but that accelerates quickly during the transition, opening long channels that invite the first migratory waterfowl of the season—as well as other visitors.  Such as the Northern River Otters recently gathering small fish and other edibles there, and after dining, sliding around on the snow-covered ice in a playful manner.  Then, ever mindful of competition for a limited food source, one of the otters swam over to three Common Mergansers and aggressively chased them off. 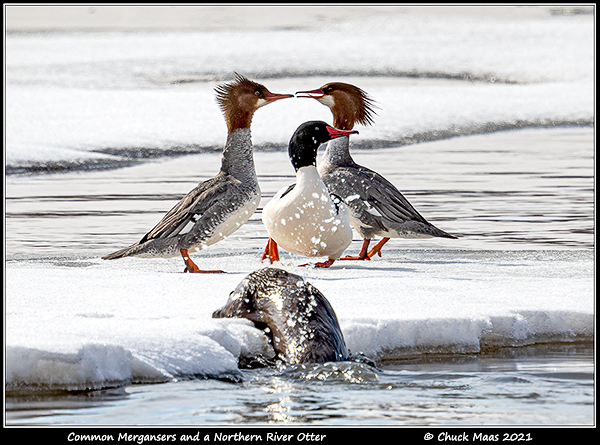 The big, white, elegant Trumpeter swans have passed through southcentral Alaska again.  Dozens stop by Potter Marsh each fall to feed and rest on their migration south.  They have an acute sense of how long to stay and when best to continue their travel, usually departing just before freeze-up. 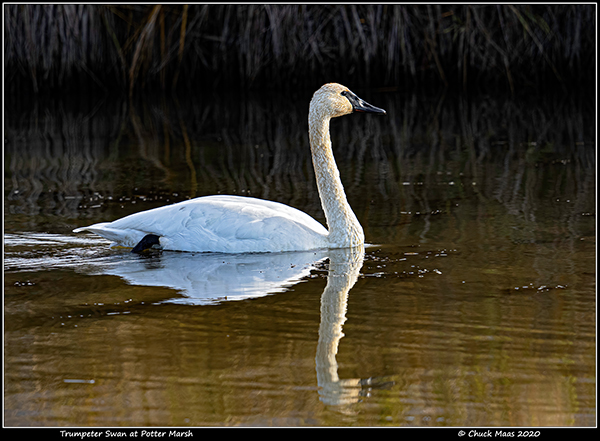 Posted in Fauna | Tagged birds | Comments Off on Fall Migration

Though far fewer photographs are finished as prints these days, the desire by some photographers to produce prints at home or in a small studio has not disappeared, and the tools for doing so continue to improve. Epson has been a leader in ink jet photo printers for decades and has raised the bar once again with their new SureColor P700 and P900 models.

I’ve owned a number of different small Epson photo printers over the years. Several improvements in the new models stand out in particular, including a slightly wider color gamut, dedicated Photo Black and Matte Black ink channels eliminating the need to waste ink switching from one to the other, and significantly reduced overall printer size. The latter may not seem like a big deal, but with the P900 offering 17”-wide printing in a 24”-wide footprint—the same width as the previous P600 13” unit—that could be a huge factor for those with limited space. In addition, both printers use a single top load tray for all paper, including fine art papers that previously required loading from an awkward front tray.

Birds have to eat all year round.  Mountain ash berries are a favorite source of food for winter residents in Anchorage, including this European Starling in striking non-breeding plumage. 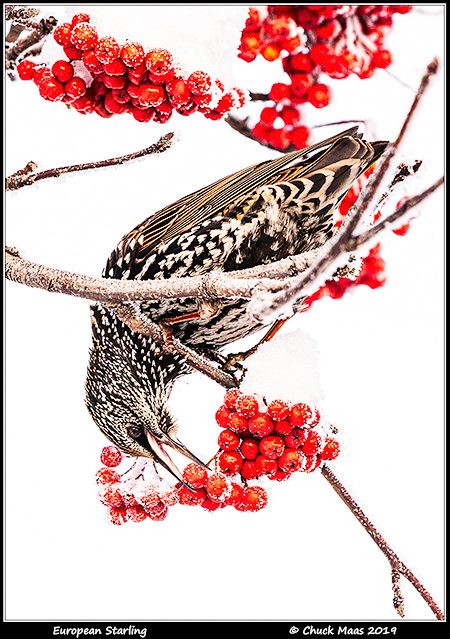 Posted in Fauna | Tagged birds | Comments Off on Winter Dining

Digital images are saved to a physical storage medium, first in the camera, and then in an editing computer (or smartphone/tablet if that’s your primary capture device). Like everything else, storage technology evolves, and at the moment several factors are converging to make for a pretty big leap in throughput capability.

One is the move to faster and higher capacity memory cards. At the top of the heap is CFexpress, as exhibited in the recently announced Canon 1D X Mark III. These cards replicate the physical dimensions of XQD and several camera bodies with XQD slots will have firmware updates to accommodate CFexpress sometime in the future.

Second is the gradual proliferation of file transfer protocols (FTP), both internal and external. Internally, for several years PCIe 3.0 has provided the lanes for transferring data from one component to another. PCIe 4.0 has now arrived with double the potential data rate, though it is currently only supported through AMD processors and appropriate motherboards. New M.2 PCIe 4.0 NVMe solid state drives are also here, some exhibiting read speeds over 7GB/s! External devices are riding the wave too. By leveraging the NVMe interface, portable SSDs are orders of magnitude faster than platter-based hard drives with some achieving a 2,800MB/s data rate. Thunderbolt 3 (TB3) is still the fastest external FTP with a bandwidth of 40Gb/s, and though a lot of recent notebooks support this standard it’s important to understand that regardless of the theoretical capability, actual throughput still depends on the limits of the storage device itself. USB (in its various iterations) has a much broader installed base than TB3, and while previously having had a much lower bandwidth ceiling, USB4 will change that by also moving to a maximum 40Gb/s throughput and actually incorporating TB3 in the standard using the USB Type-C connector.

Without a doubt there are now more storage choices than ever before with the potential of significantly improved speed and efficiency.

Posted in Computers, Uncategorized | Tagged storage | Comments Off on Advancements in Storage

Richard Nelson passed away earlier this month. Alaska Public Radio listeners will fondly remember him as the voice narrating the marvelous Encounters soundscapes. He was involved in many other endeavors as well, and at least part of his legacy of audio and video stories will live on at Encounters North. A short opinion piece in the Anchorage Daily News by Kim Heacox further describes his background and accomplishments. He will be sorely missed.

Posted in Uncategorized | Comments Off on Richard Nelson

It’s spring in southcentral Alaska and birds are busy raising young.  This American Dipper is delivering a salmon smolt to a nearby nest.  Dippers frequent clear fast-flowing rocky streams and catch much of their food underwater, sometimes walking with head submerged, or diving below the surface to probe under stones on the bottom.

Posted in Fauna | Tagged birds | Comments Off on Avian Activity

It’s been much warmer than usual in Southcentral Alaska and the seasonal change has come early—way early!  One of the markers is the return of waterfowl.  The first gulls showed up yesterday; geese should follow soon.  The arrival of these two migration leaders usually occurs in the first or second week of April, but the lakes and marshes are opening up rapidly and many more species will be here shortly.  Winter is behind us, though there may well be more inclement weather, including snow, before summer is actually here.

Posted in Fauna | Tagged birds, seasons | Comments Off on They’re Back

It’s official—there’s another full-frame digital mirrorless offering to mix it up with Sony, Nikon, and Canon—the Panasonic LUMIX S1 and S1R.  It’s not like this has been a secret, as it was part of a development announcement at Photokina back in September.  But now we have all the specs and can begin to get an idea how these new bodies will fit into the scheme of things.

While late to the party, Panasonic brings some very interesting features and factors into an already crowded field.  First, it is now part of the L-Mount Alliance, a very clever cooperative agreement among Leica, Panasonic, and Sigma in which all will use the proven wide throat/short flange distance Leica lens mount.  While the S1/S1R will debut with just three new Panasonic lenses, Leica already has five primes and three zooms with the same mount.  There are numerous sites with full specs and preproduction reviews.  A few will be listed below.  But here are some early observations.

I find this a very intriguing offering.  This pair of new bodies raises the bar in several categories.  Technology on the march.

What You Need to Know (DPReview).