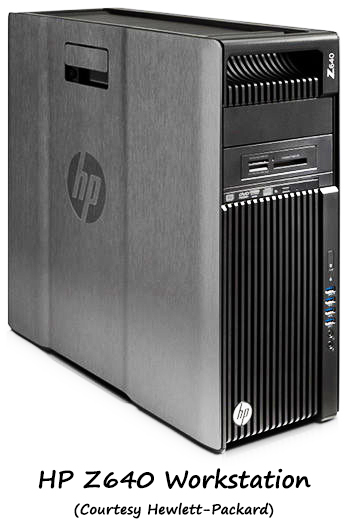 For photographers who post-process in Windows, there are plenty of “consumer level” desktops and laptops that will do the job quite well. For those who genuinely need (or want) top-level performance, upgradability, and reliability, the next step is a “workstation.” These systems are designed for mission critical tasks on a sustained basis, with robust support if or when something actually does go wrong.

Workstations typically use Intel Xeon processors (CPUs) which are often installed in pairs, and ECC (error correcting code) memory whose purpose is to detect and correct internal data corruption. By design, components are accessible and can be easily upgraded over time if needed.

Price is always a factor in equipment acquisitions and workstations by nature aren’t at the bottom of the scale of computing options. But depending on your requirements, the cost of a workstation may not be prohibitive, especially when discounts are involved (HP’s are significant), and designed-in upgradability give them a (potentially) longer life-cycle.

I’ve been using an HP Z620 workstation for the last couple of years and have been very happy with it. The latest model is now called a Z640 and has some very intriguing options. The first of these is a PCIe SSD boot drive called “Z Turbo Drive” which delivers stunning OS and program speed—roughly twice that of a SATA SSD boot drive. Since this drive is installed in a PCIe slot on the system board it leaves open an additional internal 3.5” storage drive bay (up to four total if the second optical bay is used). The second interesting option is a “Thunderbolt-2 PCIe Card.” The Thunderbolt data transfer protocol is not exclusive to Apple products, and this card delivers the latest 20Gbps bi-directional, dual-channel transfer speeds (nearly four times faster than USB 3.0) for external storage devices. It can also transfer DisplayPort video when connected with an appropriate video card.

The Z640 appeals as a primary image post-processing system when configured with a PCIe boot drive, separate dedicated drives for data, image files, and image file backup (all easily installed after purchase if desired), and even a separate scratch/catalog drive if desired. RAM options go as high as 64GB. Two processors can be specified, though of course the cost goes up commensurately, and at present—until imaging software is designed to use multiple cores more effectively—a single fast 6-core processor is probably optimal for still photo work.

Dell and several small “boutique” builders also sell workstations, or the gifted nerd can assemble one from off-the-shelf parts. However, if you’re in the market, look closely at design and support as well as cost before making a decision.

This entry was posted in Computers and tagged HP, workstations. Bookmark the permalink.