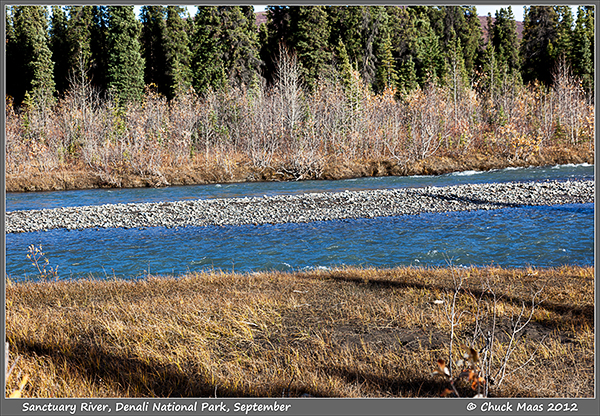 There’s a story behind this rather benign image of the Sanctuary River in Denali National Park that illustrates choices and consequences and the constant challenges wild creatures face.  I happened to be in the park in June on a stormy day with leaden skies and strong, blustery winds and it had already been raining heavily for several hours.  At this particular spot just west of the campground, the level of the river was only a little higher than in this picture, but the water was already roily and brown with glacial silt.  At that time the gravel island was mostly covered with grass and a few small shrubs, and a mew gull was sitting on a nest right in the middle of it.  I thought to myself that perhaps the nest location wasn’t the most prudent, but it all depended on the weather.  Unfortunately, the rain continued in earnest, and by later that day flood waters completely covered the small island.  When the waters eventually receded, the nest and all the vegetation was gone—the gravel island had been swept clean.  Of course these sorts of events happen all the time in nature, but because I was a witness this particular sequence seemed particularly poignant.

This entry was posted in Locations, Wildlife and tagged birds, nature, rivers. Bookmark the permalink.