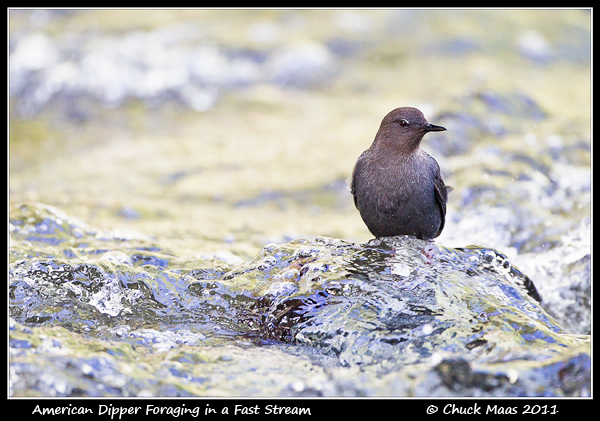 It’s family time for all manner of wild creatures in Southcentral Alaska.  Protective moose cows with calves have had run-ins with a number of humans during the last couple of weeks.  It pays to keep your distance from big animals with young.  Nesting birds have already hatched chicks and many will have second clutches in this accelerated northern reproductive season.  I spent the morning watching a pair of American Dippers diligently forage for food in a fast local stream to satisfy a clamoring group of very vocal nestlings nearby.  Green grubs of some sort seemed to be the most prevalent fare, though various bottom-dwelling insect larvae were also gathered as well as a small salmon fingerling that happened by at the wrong time.  Dippers winter over in Southcentral and are less pressed than many species to reproduce quickly in order to be ready to migrate south again in just a matter of weeks.  Their foraging habits are unique and very entertaining to watch; look for them along any fast-moving freshwater stream.

This entry was posted in Wildlife and tagged birds, Dipper, wildlife. Bookmark the permalink.